Sometimes Coming Up With A Title Is The Hardest Part

It's also swiftly approaching my bedtime, so I'm going to make this monthly update snappy. 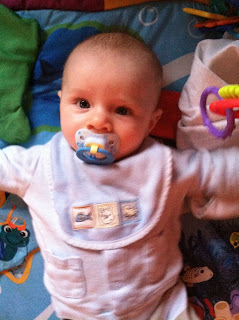 Have you seen this kid? He is incredible and I am madly in love with him. At 4 months old he continues to be the happiest, smiliest (Yes, I just invented that word.  Ha!) baby I know. He basks in the attention of others and gladly holds conversations with anyone who gives him a moment of their time. In addition to his ooohing and aaahing, I've hear a few consonants here and there. I'm going to do my best to train this one to say "mama" first.

He is very ticklish and loves to be tickled. He anticipates it, smiles, and laughs with his big giggle when the tickles come his way. It's adorable and wonderful because it is impossible not to smile and laugh with him.

He is not rolling over yet, but you should see the moves he has while lying on his back. He's great at batting at toys, grabbing toys, waving them around, and then getting frustrated when he can't reach them. He also kicks at toys and objects like a pro. My favorite is when he wiggles, waves, and kick/stomps the ground like a he's doing an Irish dance, complete with all the flourish.

Liam still lets us know when he is tired and falls asleep like a champ. He is officially sleeping in the same room as his sister every night, and so far it's going really well. *Knock on wood that I didn't just jinx myself!* He wakes up a couple of times a night, but I don't mind. We just take care of business and he goes right back to sleep. The only problems arise when he wakes around 5:30 or 6:00 in the morning. That usually wakes Emma up too, which means my day starts too early. 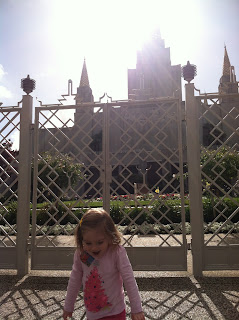 My girl and my big, black dog have something in common. Sometimes, even though I know they need to "go potty," they put up a fight. My dog does this to me because, in spite of being a Labrador Retriever and bred for cold, wet experiences, he is a complete sissy with sensitive toes who is afraid to set foot in his run in cold, wet conditions. Emma puts up the fight because she is two and has a penchant for being a drama queen.

The sounds that come out of this girl during her tantrums/mental breakdowns are remarkable. I think she stands in front of the mirror and practices her fits. No, really. After her nap today she was convinced that it was the next morning. She completely flipped out when I informed her that we would be eating dinner, not breakfast. Consequently, we ate pancakes and eggs for dinner.

She is very smart and picks up on everything. She remembers everything, too, so we have to be really careful of our words and actions around her. She loves to read and sing. She can write the letter E if I tell her where to draw the lines. She talks non-stop most of the time, but is mute around people she doesn't know well. She is obsessed with princesses. She loves going through people's purses and playing with their makeup. I think she may be developing a fear of the dark. 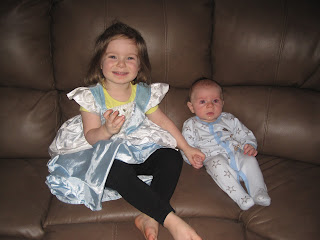 Now it is officially past my bedtime. That's what happens when I get on a roll, talking about my remarkable babies.

Posted by SarahSunshine at 9:58 PM No comments: