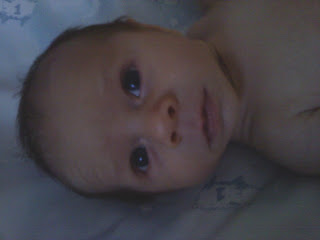 Liam is one month old.

That went by really fast.

This baby boy is amazing. He's mellow, except during the evening when he just wants to be held and I just want to make dinner, eat dinner, bathe his sister, or shower. Then he likes to cry a lot. Good thing there are usually two parents home around that time.

He spits up after almost every feeding. If you don't get a good burp out of the kid, he'll spit up for a while afterwards. As a result, I'm doing laundry more frequently than I did before he came into the world.

He likes pacifiers and prefers the Nuk variety. 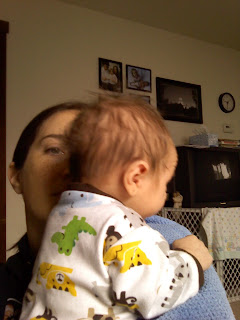 He is a champ at holding his head up and looking around. He can keep that little head pretty steady for a minute or two before he becomes a bobble head.

Liam is approximately five days into his first cold. Thanks, Big Sister, for sharing. He does not like the snot sucker (AKA nasal aspirator) very much.

The kid makes lots of interesting noises. He grunts, squeaks, whimpers, snorts, and cries. My favorite is this little cough cry thing that he does that means, "Hurry up and feed me!"

He loves Emma, almost as much as she loves him, I think. He likes watching her run around and listens to her talk and sing. He even sleeps through her screams, singing, yelling, jumping, and general two-year old behavior.

We all love him.

Liam has rolled over from his front to his back three times. He hasn't actually mastered the skill of rolling over, he just has fits of wiggly rage when he no longer wants to be on his tummy. Wiggly rage leads to incredible feats of strength, like rolling over. Just call him Baby Hulk. 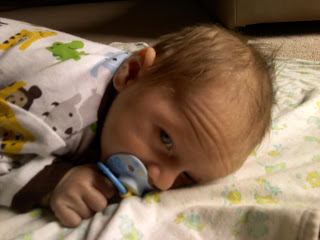 I think he's starting to smile. I've seen several silly smiles when he's falling asleep, but those don't really count. However, today he smiled while wide awake. He was looking over my shoulder at the front door and made a big happy face.

I love him dearly. The really super thing is that I actually LIKE him. A few weeks ago I actually spoke the words, "I love little babies!" That's a phrase that I had never said before. I fully expected that it was a phrase I would never ever say.

This little man is changing me.

Did I mention that I love him?

Posted by SarahSunshine at 6:34 PM No comments: