It's only March and I've already read more books this year than I read in the entire twelve months of 2010.
I am amazing!

Accomplishing this major feat is undoubtedly due to the fact that I am no longer working full time. Joining a book club has helped. Emma has also helped by taking longer naps than she did last year.

Let me start off by saying that I once promised myself never to talk about my baby's age in months after the first year mark. I just thought it sounded strange and didn't want to be one of those moms who spoke in unfamiliar units of time. I was a fool. Saying she's "one year AND a month" sounds too much like "One year IN a month" and then I might confuse someone. If I say she's 13 months old people can figure it out. So, here I am, counting in months.

I don't really know what to say. Time is flying and Em is amazing. She is running now and falling less. She says "Uh oh!" when she drops things. She understands tons of what I say to her. Her hair is finally laying flat instead of sticking up everywhere. Her ears are ticklish. She is adorable.

Here she is enjoying her happy place. She climbs up well, but doesn't get down so easily. 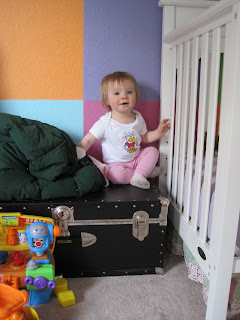 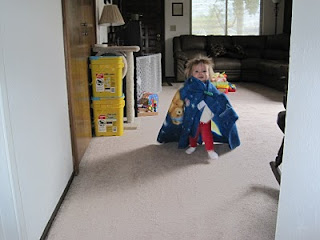 In other news, I am going to become a babysitting champion! In addition to watching my buddy Addison as part of a babysitting trade that allows me to go to work once a week, I'm going to start watching an itty-bitty baby soon. Little Torah is exactly one year and a day younger than Emma and she's going to be our new buddy. I'm excited!
Posted by SarahSunshine at 4:34 PM 1 comment: